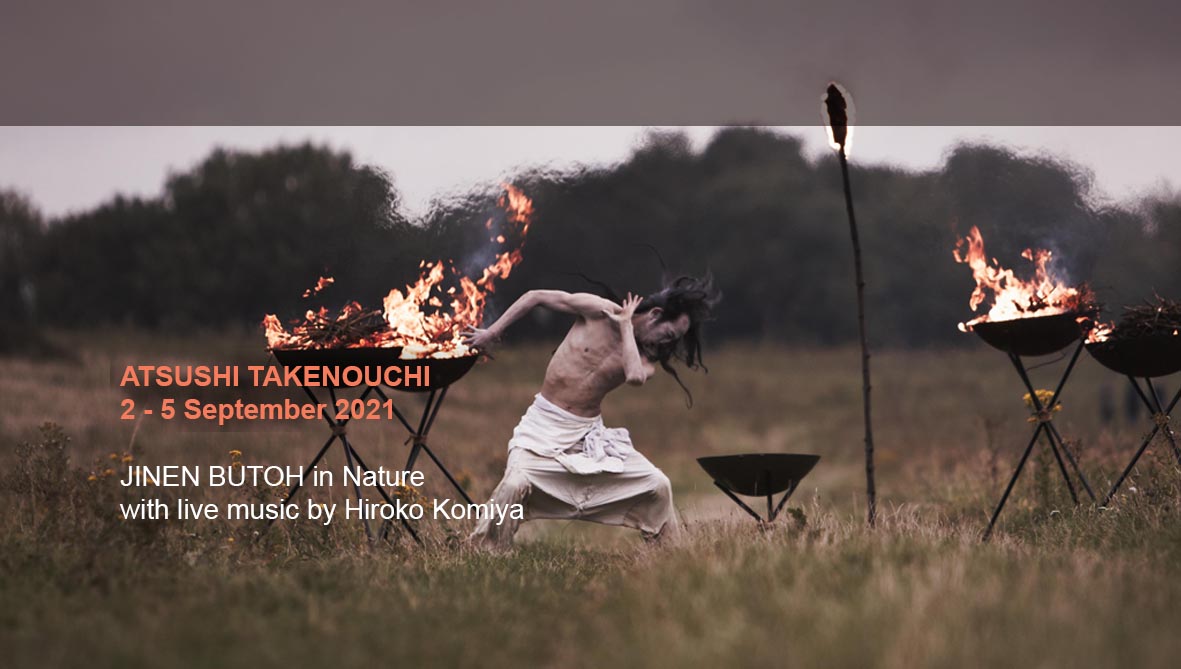 All life was born from the earth. And, originally, humans danced on the ground of this earth. It is important to find out and be conscious that our body is a part of this huge circulation. This time, we will work on our body movement to recognize the connection between nature/environment and oneself through JINEN Butoh training. Atsushi will guide us how to create dance from this awareness, which will enable us to know that we can change all the environment into dance.

During this workshop, we will explore body gravity, movement and balance, imaging body, transformation by internal and external states, visibility and invisibility, various ways of walking, conscious and unconscious movement and create a dialogue between body and environment through basic Butoh practice. Then, we can feel the connection between our body and nature, and also experience the environment as a part of our body. We will discover how the body movement arises and becomes dance.

The class will be accompanied by live music made by Hiroko Komiya.

Atsushi Takenouchi joined the butoh dance company “Hoppo-Butoh-ha“ in Hokkaido in 1980. His last performance with the company was “Takazashiki” (1984), which was worked on by butoh founder Tatsumi Hijikata. Atsushi started his own company, “Jinen Butoh,” in 1986, and created solo works “Itteki” and “Ginkan,” as a universal expression of nature, earth, and ancient times as well as impressions of the moment and the meeting of people and environments. He made a three- year “JINEN” tour project throughout Japan for 600 site-specific improvisations (1996–1999). During this time, he studied the spirit of the universe under Kazuo Ohno and Yoshito Ohno. Since 2002, he has been mainly based in Europe, working on Butoh dance collaboration projects with dancers and actors in France, Poland, the U.S.A., and other countries. Joining in festivals such as Avignon Festival, Paris Butoh Festival, and NY Butoh Festival, he has been presenting his solo pieces. At the same time, he also collaborates with film makers. The recent work in Alaska and Hawaii, “Ridden by Nature” (by Kiahkeya), an environmental art film, will be completed soon.